You are here: Home / Outdoors / Beware of fireworks smoke 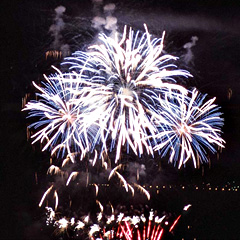 Where there’s fireworks there’s smoke and that can be a problem for some celebrating America’s independence.

Iowa Department of Natural Resources air quality specialist, Mindy Kralicek, says smoke from fireworks displays could be a problem for some people.

Kralicek says the fine particles in the smoke are hard on people’s lungs, particularly for children, elderly, or women who are pregnant.

She says there are gases used to make the fireworks displays work and those can be a problem if breathed in. Kralicek says there’s nitrogen and sulfur that can form nitric and sulfuric acid and that’s what’s hard on the lungs.

Kralicek says you can avoid problems by paying attention to the weather conditions and staying out of the flow of the smoke. “We don’t want people to not enjoy the fireworks, because they are spectacular and they’re a celebration — but view them upwind,” Kralicek says.

She says it’s particularly important if the air is stagnant and not moving well. She says the fireworks legally sold for use by individuals aren’t as big a concern. She says some do send out a lot of smoke, such as smoke bombs, and you don’t want to breathe that in, but she says for the most part it’s the big fireworks displays that produce the most potentially harmful smoke.

An air pollution monitor in Davenport recorded unhealthful levels of fine particles after Fourth of July fireworks displays last year. For more information on the potential pollution from fireworks, visit the D.N.R.’s website .