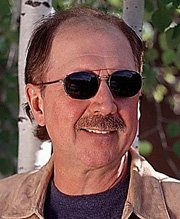 The author whose first book sparked the “Rambo” phenomenon is releasing his 30th novel today. David Morrell , a former University of Iowa English professor, says his new work of fiction, “The Shimmer,” is based on the real-life mystery of bright colorful lights that are seen near the tiny town of Marfa, Texas.

Morrell says there are reports of the unexplained lights dating back to 1889 when a rancher first spotted them darting in the darkness.

“He saw the lights and he thought they were campfires from marauders from Mexico,” Morrell says. “The problem is, campfires don’t move around and don’t go up and down, go sideways and change colors. He was terrified enough that he and the ranch hands got out their rifles and guarded the cattle and then the next morning, they went out to look but they found nothing.”

Several scientific studies have produced theories but no solid facts on what causes the unusual sights, so Morrell says he built on the story and had hundreds of spectators headed for west Texas nightly, trying to see the ghostly lights. “I thought it would be interesting to have lights that reinforced the personalities of the people watching them,” Morrell says.

“If you were a hateful person, the lights would make you more hateful. If you were a person who was empty and lonely and needed to be filled, the lights would fill you as if you’d seen God.” Morrell attributes some of his success as a writer to the depth of his research to make the compelling stories seem true-to-life.

He’s taken training in firearms, offensive/defensive driving, even hostage negotiation. One of the heroes of “The Shimmer” is a pilot and several scenes involve him flying, so Morrell says he went to the airport and hired a pilot to take him up in a small aircraft like the one his hero would be using.

“Once I got up, I liked what I was doing and thought as further research, maybe I should take pilot training,” Morrell says. “I kept at it and at it and at it and to my great pride and satisfaction because it was so difficult, I received my private pilot’s license three weeks ago.”

Morrell was a U-of-I professor from 1970 to ’86. The basis for the original Rambo movie was Morrell’s first book, “First Blood,” which was published in 1972, when Morrell was in his second of 18 years of teaching English at the U-of-I. Morrell is now 66 and lives in New Mexico. He has more than 18-million copies of his books in print in 26 languages.