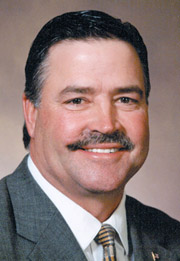 One eastern Iowa dairy farmer has reportedly dumped out hundreds of gallons of milk in protest of low prices — but the president of the Iowa Farm Bureau says that’s not the way to go.

I.F.B. president Craig Lang of Brooklyn runs a dairy farm with his brother, and says the bureau doesn’t support pouring out milk.

Lang says,"We certainly do not support the idea of throwing away food, whether it’s in protest or not, we don’t think that’s the right thing to do."

Lang says dairy farmers have tried to bring attention to the fact that processed dairy products like milk, cheese and cottage cheese have dropped in average price only 22% from its high, while the milk price has dropped "well over 100-percent."

Lang says it has been tough on dairy farmers. He says they were paid $20 for milk on the farm, they’re now getting paid nine or $10. Lang says dairy farmers are trying to show consumers the price they pay for dairy products could be lower. Lang expects the eventual impact to shut down some Iowa dairy operations.

"I think we’ll see a number of dairy farmers go out of business this year, they’ll make a decision to liquidate their cows to pay down their debt," Lang says. He says those farmers will decide they can no longer make it with the small margins they’ve seen in the past year. Lang says other dairies likely won’t jump in to take the cows from those dairies that decide to liquidate.

Lang says he doesn’t think those cows will be picked up and Iowa will lose a share of the dairy production in the country. He says there could be some nationwide cutback in the number of dairies, as he says there will have to be a shrinkage of milk cows for milk prices to come back up. Lang says the same thing will have to happen in the pork industry.

"The demand is just not there for the production we have," Lang says. Lang says the economic situation is such that without consumer milk prices coming down as much as prices to farmers, people are choosing to buy less milk, and that does not help the supply situation for farmers.