You are here: Home / Human Interest / King explains "no" vote on monument to honor slaves who built capitol 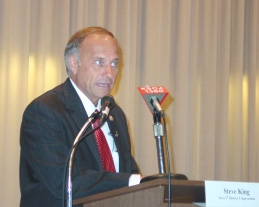 Congressman Steve King was the only “no” vote in the U.S. House this week on a resolution to honor slaves who helped build the U.S. Capitol.

King, a Republican from Kiron, says he voted “no” because the resolution was part of a deal that would get the words “In God We Trust” back in a picture that’s on display in the capitol visitors center.

“The architect of the capitol had gone in — or directed someone to go in — and photoshop and scrub the language, ‘In God We Trust’ that was clearly visible in the picture of the (house) speaker’s chair that’s shown in the capitol visitors center,” King says. “And in order to get them to agree to put the real language back in the picture so the picture was real, we had to agree to pass a resolution to put another monument up to slavery.”

King says slavery was “abhorrent,” but he is tired of those who are trying to erase the country’s Christian heritage, an accusation King lobs at the architect of the capitol.

“The architect of the capitol has been for years trying to eradicate any sign of faith or Christianity from the capitol itself and from the historical documents that flow from it,” King says. “…I’m out of patience with these kind of maneuverings.”

The resolution calling for a monument to honor the slaves who built the capitol passed the House on a 399 to one vote Tuesday night. King says he believes there are others who would have liked to join him in voting no, but didn’t want to take a stand.

“I think it’s simply many of them thought, ‘I don’t want to die on that hill,'” King says. “‘It’s not worth fighting over.'”

But King says he was willing to take the heat and draw a line.

“This doesn’t have anything to do with slavery to speak of,” King says. “It has to do with them trying to amend our history after the fact.”

King made his comments during at telephone interview with Radio Iowa. Click on the audio link below to listen to the conversation. Read more about the conversation on The Blog .

King plans to “slowly” walk through the visitor’s center on Thursday to see if the picture in question has been corrected and the words “In God We Trust” are clearly visible.