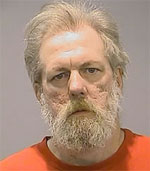 A 52-year-old man who was living in the small, central Iowa town of Clemons has been sentenced to 15 years in a federal prison on child pornography charges.

In November, authorities searched Johnson’s home and found "numerous images and videos of child pornography on (his) computer." This past April, Johnson pled guilty to child pornography charges. His sentence was handed down this week.

Johnson has other convictions on his record, including a 2005 conviction for sexual exploitation of a minor in Marshall County. His name and picture are posted on the state’s Sex Offender Registry.