You are here: Home / Health / Medicine / Blind rider serves as inspiration for others 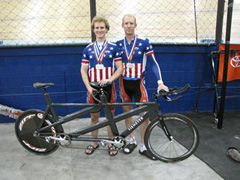 A team of bicyclists on this week’s RAGBRAI is pedaling across Iowa to raise awareness and research dollars for a rare disease that can cause blindness.

Joe Schmidt, from the University of Iowa’s division of opthalmology and visual sciences, says Team Project 3000 is educating people about what’s known as L-C-A.

"Clark Rachfal, who is a blind U.S. Paralympics cycling champion, is serving as our inspirational leader because he actually has been diagnosed with Leber congenital amaurosis," Schmidt says. "He and his sighted partner are riding on a tandem bike…to raise awareness for Project 3000 and they’re joined by about a dozen other riders."

Those other riders include medical researchers from the U-of-I and other volunteers and supporters of the effort. Schmidt says Project 3000 is an effort to find the estimated three-thousand people across the U.S. who have the affliction — and may not know it.

"LCA is a rare inherited eye disease that typically affects children or young adults, that causes them to progressively lose vision as they age," Schmidt says. "It typically strikes during infancy or childhood." Once the people — most likely children — are identified who have LCA, he says they can be offered important genetic testing through the U-of-I or wherever they may live.

Schmidt says, "That testing would allow for further research to be done and hopefully to identify the different genetic mutations that are responsible for the disease in their particular case, and will help contribute to different treatments that are on the horizon to be developed and offered to individuals."

More than $1.5 million in gifts has been raised through the U-of-I’s Foundation for Project 3000 since the project’s inception in 2006. To learn more, visit: "www.uifoundation.org/project3000".