You are here: Home / Education / "Shock" from "The Electric Company" to be at Iowa State Fair 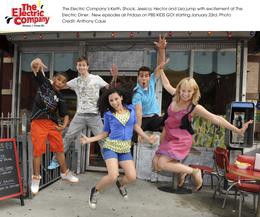 Kids from Storm Lake and Perry will be bused to the Iowa State Fair later this month so they can meet a national public T.V. celebrity.

"Shock" from "The Electric Company" will be at the Fair on Saturday, August 15.

A revamped "Electric Company" has been airing once a week since January, but P.B.S. president Paula Kerger says starting this fall, the show will air once every weekday. "And so we’re really interested in getting the word out about ‘Electric Company’ to kids and to parents," Kerger says.

The kids from Storm Lake and Perry who’ll be bused to the Fair are participating in Iowa Public Television’s "Raising Readers" initiative and network officials say the kids will get "V.I.P. treatment" in Des Moines — plus the chance to meet one of the characters they see on television.

"We’ve partnered with Iowa Public Television, actually, on a lot of work for early childhood," Kerger says. "The ‘Raising Readers’ which is very specifically geared toward literacy. ‘Ready to Learn’ which is for pre-k. We have a ‘TeacherLine’ program and one of the courses that Iowa’s been working with us on is for daycare providers to really help them build their skills, so I think that’s where we can make a really big impact." In the past year, 165 care-givers from 48 Iowa counties have completed the "TeacherLine" course.

"The Electric Company" started airing on public T.V. stations in 1971, teaching young viewers how to take letters of the alphabet and make words. The last episode was recorded in 1977, but it continued in reruns through the early 1980s. This past January, a new version of "The Electric Company" started airing with a new cast, but the same opening line: "Hey you guys!"

Kerger, the P.B.S. president, says her network felt both a moral and an economic imperative to help the nation’s kids learn how to read and that’s why "The Electric Company" was revived.

"The show really needed to be reimagined for today’s kids and what today’s kids’ needs are and there are so many kids whose reading skills are really not as strong as they should be," Kerger says. "And you have all the facts and the data about if kids can’t read well by the third grade then chances are their reading skills will never evolve and in places like California they calculate the number of prison beds needed (in the future) by the literacy rates of third graders."

On August 15, "Shock" from "The Electric Company" will appear on a State Fair stage for an "interactive" show not only for the kids from Storm Lake and Perry, but other fairgoers, too.

Kerger says it’s all about helping kids reach their potential.

"There are lots of opportunities for us in the work that we do to create a breadth of programs so that when kids enter school they have the basic skills that they need to be successful, but they also have the kindling of excitement and knowledge and learning," Kerger says.