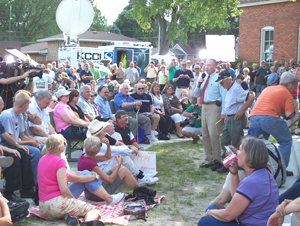 Hundreds of people turned out to see Senator Chuck Grassley at four "town hall" meetings in central Iowa today. Over 500 gathered in an Adel park late this afternoon. Many want Grassley — a Republican — to walk away from closed-door health care reform negotiations with Democrats.

Vicki Crawford of Granger drew repeated bursts of applause as she lectured Grassley for over three and a half minutes.

"I have heard your recent rhetoric about how we all want the same thing as Obama — health care reform.  I disagree on every level," Crawford said.  "There is nothing a liberal wants that I would agree to and we have to stop giving ground."

Crawford told Grassley she liked him, but she accused him of being an appeaser.

"This is no less than liberty versus tyranny, good versus evil and there is no middle ground," she told Grassley, asking: "With whom will you choose to stand?"

Grassley told Crawford and the rest of the crowd that if he hadn’t been involved in those closed-door negotiations, a health care reform plan would have passed over weeks ago.  That delay has given the "grassroots of America" an opportunity to speak up at town hall meetings this August, according to Grassley.

"I feel a little bit like the boy sticking his finger in the dike, trying to stop the ocean from coming in," Grassley told the crowd in Adel.

There were people in the crowd, like Sharla Yeats of Urbandale, who want the health care reform many Democrats advocate. Yeats began her remarks by describing herself as a liberal and a man standing nearby cursed.

"I want to ask you (Senator Grassley) why you won’t use your strong Republican voice to clarify the outright lies that are out there about the programs that are being proposed," Yeats said to Grassley.

Yeats continued, drawing boos.  "I see signs that say ‘Kennedy Lives, Grandma Dies.’  I see signs with Obama in white face as ‘The Joker.’  I see signs comparing him to a Marxist," she said, as people around her shouted repeatedly: "Read the bill!" 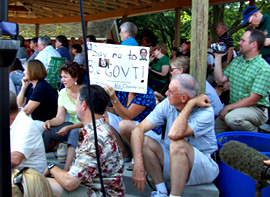 Grassley began the event in Adel as he had earlier in the day in Winterset, Adel and Panora — promising he would not support any bill that creates a so-called "public option" or government-run health plan to compete with private insurance.

"I would not vote for that," Grassley said, to loud applause in Adel.  Also — at every stop today — Grassley defended his work with six others on the Senate Finance Committee — Republicans and Democrats.

"Not all Democrats think the same and there’s some that are like me, who do not want any more government interference in health care," Grassley said.

All four of the "town hall" meetings Grassley held today had to be moved to larger venues because of overflow crowds and three of the events were held outdoors.