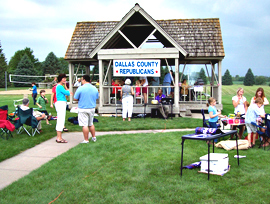 Five Republican candidates for governor spoke to a small crowd of Dallas County Republicans this weekend, with one of the five promising to cut ties with the feds when it comes to health care.

Bob Vander Plaats, a business consultant from Sioux City, was the only gubernatorial candidate to mention the national health care reform debate.

"This health care debate’s a debacle. They’re trying to sell you something good and they’re hoping that you’ll buy it because they can have total control. It’ll be a complete loss of your freedom," Vander Plaats said. "It’s time we have a governor who will stand up for the 10th amendment and Iowa’s sovereignty from the federal government and say, ‘We will run our own health care in the state of Iowa. We will not let the government run our health care for us.’"

Vander Plaats did not expand on his proposal, however, like whether he would turn down federal money for Iowans enrolled in health care programs like Medicare and Medicaid.

About 80 Republicans crowded under the roof of a gazebo earlier this afternoon to hear Vander Plaats and the other candidates speak in the midst of a rain storm. As children jabbered and danced in the middle of the floor, Christian Fong — a business executive from Cedar Rapids — told the crowd he’d lived the American dream.

"For me, the son of an immigrant — an immigrant that was here legally, I should add — immigrants teach their kids what it means to be Iowans," Fong said, mentioning his father who was an immigrant from China. "What comes first in Iowa? It’s those sort of values that make us strong: personal responsibility, personal freedom."

"This governor punted on an opportunity to bring a lot of new, high-quality, high-paying jobs to Marshalltown with a new power plant," Rants said. "Yet he’s traveling the country saying his…Iowa Power fund…has created 8700 jobs in Iowa." Rants disputes that number, suggesting it’s closer to 100 jobs.

State Representative Rod Roberts of Carroll agreed that Culver’s not a good steward of the state’s finances. "The budget gap projection is a billion dollars next year. The fact that it’s that far out of alignment is a sign of disrespect for the people of Iowa," Roberts said. "To be respectful of the hard-working taxpayers of this state means that we should be responsible in Des Moines with the taxpayers’ dollars."

You can hear all of what the candidates had to say today by clicking on the audio link below.