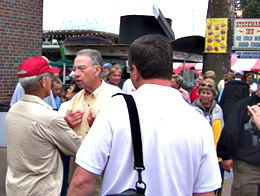 Iowa Senator Chuck Grassley says he talked last night with the other members of the so-called "Gang of six" in the senate committee that’s working on the health care bill.

Grassley, one of three Republicans in the group, says they haven’t talked since the August recess.

Grassley says, "We needed to update each other on how we feel about the present environment exampled by the raucous town meetings that have taken place — not so much in Iowa — but in Pennsylvania, Maryland, and the grassroots expression that that exemplifies."

Grassley says they want to move forward taking the public opinion into account. Grassley says the health care issue is just part of an overall concern of the public. "What you hear about health care at the town meetings is more like the straw that broke the camel’s back in the sense that people see the nationalization of banks, the nationalization of General Motors, they see big deficits and then they see us talking about spending more money in the two bills that are out there — not our bill — but the two bills that are out there…they just think that congress has gone bananas," Grassley says.

There’s been some talk that Democrats might try to pass something without the Republicans support if they can’t get the provisions they want, but Grassley says that hasn’t impacted his group. Grassley says the senate committee has decided it wants to move ahead, and move ahead taking into account what the impact of what they’ve heard at the town hall meetings.

Grassley made his comments at the Iowa State Fair where he is hosting a group of ambassadors from other countries. There were reports that protesters might show up to speak to confront the senator, which he says is okay. Grassley says any sort of protest whether he sees is or not is "perfectly legitimate in a democracy." Grassley says he believes he’s been open to "a lot listening to that" including his town hall meetings and he has 16 more town hall meetings scheduled.

Grassley says they’ve seen the best of Iowa’s industry and financial services, along with colleges like Buena Vista and Iowa State University. He says the thing that has seemed to impress the ambassadors the most is the friendliness of Iowans. The ambassadors toured the animal exhibits, looking at the biggest bull and other animals before sitting down to a lunch that included a turkey leg.