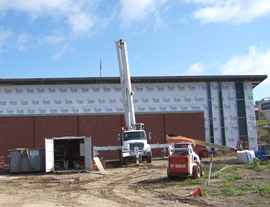 Things are on the move at the Iowa Gold Star Military Museum located at Camp Dodge in Johnston. Museum director, Russ Bierl, says they are moving hundreds of items from their old building to the newly constructed building. Bierl says all of the current exhibit items, the archives and the things they weren’t able to exhibit in the past are moving into the new 18,000 square foot exhibit hall that includes a library and education center.

This move is a lot different than one undertaken by the average Iowan who needs help with the fridge and couch. There’s some big items that’ll require heavy lifting. There’s a U-H-1 Huey helicopter, an A-H-1 Cobra helicopter from the Vietnam era, and they also have P-40 flying tiger airplane coming in, as well as an armored personnel carrier — an M-one-one-three, and a World War Two era halftrack. The heavy equipment was figured into the move when the building was designed.

Bierl says the girders in the roof were reinforced to be able to hold the weight of a hanging the helicopter and airplane, and the floor has been reinforced to handle the personnel carrier and halftrack. A periscope from a cold-war era submarine was recently installed in the building. Visitors will be able to look through the periscope out through the top of the building. Bierow says the exhibits will be closed awhile as they make the move.

Bierl says the weapons room exhibit room will open October 12th and they will have the library open. The lobby and reception area will also be open. He says it will take a number of months to get the large gallery open. Bierl says they hope to have a grand opening for the new addition on April 8, 2010. For more information or questions about the Iowa Gold Star Military Museum, or call 515-252-4531.