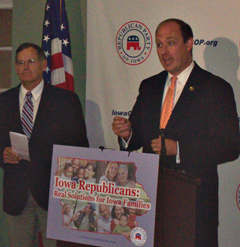 Democrat Governor Chet Culver is taking heat from Republicans over his pledge to cut his own salary by 10%. The governor’s annual salary is $130,000; 10 percent of that is $13,000 if the cut is applied to his salary over a 12-month period.

A 10% pay cut for the eight months that remain in the state fiscal year would be in the neighborhood of $8,600. But a budget document released yesterday indicates Culver’s pay cut will be $7,000 over the next eight months. That’s a pay cut of just under 5.5%.

Matt Strawn, the chairman of the Republican Party of Iowa, says the governor hasn’t followed through on his pledge.

“First and foremost this shouldn’t be about the semantics of whether it’s a prorated pay cut or a full pay cut.  This is about leadership and when the governor puts out news releases and television ads trumpeting the fact that he’s going to take a 10 percent pay cut, that’s exactly what Iowans expect,” Strawn says.

In his campaign ad, Culver merely mentions that he cut his own pay and does not make any reference to the level of the cut. Strawn says Culver promised to take a 10 percent pay cut and he should follow through on that promise.

“I think Iowans should hold him to his word to do that,” Strawn says.

A spokesman for Culver told The Des Moines Register the governor’s new chief-of-staff decided none of the salary reductions would be “retroactive.”  It means the pay cut for the governor, his top aides and for state agency directors would go into effect in the pay period that begins November 1.