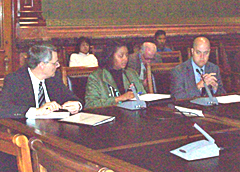 Legislators are expressing some frustration with the three state universities over progress in addressing sexual misconduct on the campuses.

Representative Wayne Ford, a Democrat from Des Moines, asked officials from the three state universities a question during a statehouse hearing on Tuesday.

“Because we’ve been nationally-known for some various assault cases dealing with the athletic department — we know what cases we’re talking about — what would you say to the people listening now who’s going to send their daughters or sons to a Board of Regents school?  What’s the climate now?  What can you tell them?” Ford asked. “Because the only time we hear about that is when somebody gets raped and we see it on t.v.”

Jonathan Carlson, senior associate to the University of Iowa’s president, defended the three universities. “The level of awareness at the University of Iowa, and I would guess at U.N.I. and I.S.U. as well, is so far above where it was two years ago that there’s no comparison,” Carlson said. “And by awareness I mean not just an understanding that this is a problem, but an understanding that this behavior is wrong and will not be tolerated.”

Ford and other members of the Legislature’s Government Oversight Committee acknowledged some steps have been taken on the campuses. Ford, though, said the universities “were a long way from where they need to be” when it comes to creating a “comfort zone” on the campuses.

“The guy who does a thing at the bar and goes to the University of Iowa and do a date rape, that’s not going to make the front page.  If an athlete does anything similar, it makes the front page and all your work goes out the window,” Ford said.  “I think you’re walking a very delicate line, speaking as a former athlete, on how touchy that is so I would applaud what you’re doing, but you have some tremendous challenges.”

“We want to get to the root of the issue,” Sommerville said. “We want to make sure that students make good decisions and make good choices not only for their safety, but the safety of everyone around them.”

Jon Buse, dean of students at the University of Northern Iowa, said they’ve taken steps to ensure students know they’ll be held accountable for their behavior on campus.

“In terms of assurances, I think our campuses are safe places,” Buse said.  “At the same time, we have to be honest with students and parents and say that gender violence is a real problem not just for colleges and universities, but our larger society.”

Representative Clel Baudler, a Republican from Greenfield who is a retired state trooper, said he “appreciates” what’s been done on the campuses, but Baudler said he wants there to see crime reduced in Ames, Cedar Falls and Iowa City.

“And I know there’s several people that I represent that have kids in this case go to the University of Iowa and several that I don’t represent are very concerned about just walking back from the taverns back to the campus because of assaults that have happened on the way,” Baudler said.