You are here: Home / Outdoors / DNR officer works to stem decline of rattlesnake 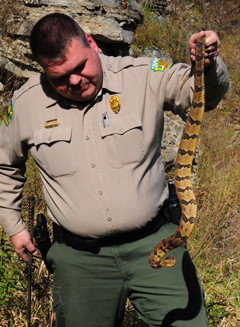 A state conservation officer has spent more than two decades tracking a reptile that most Iowans would choose to avoid.

Burt Walters with the Iowa Department of Natural Resources says the timber rattlesnake population in the state has dropped by 50% since the 1980s.

He blames a combination of factors including loss of habitat, urban development and people who are killing the snakes or taking them as pets.

Walters says the rattlesnake isn’t as dangerous or aggressive as most people think. “The rattlesnake is primarily a docile snake actually,” Walters said. “If you’re not looking for them, you’ll probably walk right by them and they’ll never rattle or bother you.”

The dramatic decline of the rattlesnake has led Walters on a crusade to educate the public about the creature’s role in the wildlife community. He says snake poachers can have a very serious impact on the population because a timber rattler’s reproductive potential is so low.

Male rattlesnakes in Iowa, because of the cold temperatures and the need to hibernate, require 5 to 7 years to mature. Female rattlers need 7 to 11 years to mature. In addition, the female can only bear young every 3 years. Walters says rattlesnakes help control rodents and could one day benefit human ailments. For instance, rattlesnake vemon is being used in experiments with heart disease and arthritis.

“We really just don’t know what (benefits) they have,” Walters said. “I’d hate to see them become extinct and know we had something there that may be the next cure for arthritis of something.” Timber rattlesnakes are most commonly found in northeastern Iowa, along the rugged bluffs lining the Mississippi River. Walters say their hibernating season typically runs from late September through April or early May.