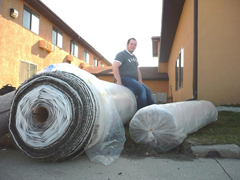 Paul Hughes and new carpet at the Shenandoah Days Inn

The new management at Shenandoah’s Days Inn hotel is dealing with what one former employee says is an old issue — bed bugs. A former employee who wishes to remain anonymous says the bed bug issue is nothing new.

He said, “They had bed bugs for about 6 – 8 months and would never get rid of them, they said it would cost too much to exterminate. I found one and put in a bag to show the health inspector,and the boss said, ‘Throw it away or you’ll be fired.’ They’d just wash the sheets with blood stains and bugs and put them back on the beds and not get new sheets. They knew about this for a long time.”

The man claims that OSHA just down the hotel this week because of the issue and the old management and many on staff recently quit because of cleanliness issues. New to the position this week is Essex native Paul Hughes. Hughes says crews are replacing every carpet and bed in the building. : “We’re getting everything taken care of that needed to be taken care of 6 months to a year ago. We’re doing this to better the hotel and give the people coming in to stay here a better place to stay,” Hughes says.