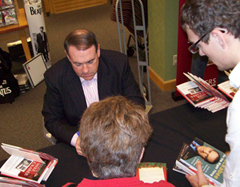 Former Arkansas Governor Mike Huckabee — the winner of the 2008 Iowa Caucuses — made stops in Davenport, Cedar Rapids and West Des Moines Sunday to sign copies of his new book, “A Simple Christmas.”

Chris Ortale drove from Coralville to West Des Moines Sunday and got Huckabee to sign her book at about eight o’clock Sunday night. She supported Huckabee in the 2008 Caucuses and “absolutely” wants him to run again for president in 2012.

“His honesty, his integrity, his character, his values pretty much line up with mine,” she says.

Bill Brunia of Urbandale waited in line for about 40 minutes to get Huckabee’s signature on the new book.  Brunia wishes Huckabee had been the G.O.P’s presidential nominee in 2008.

“He’s just a great guy. It’s too bad that he didn’t get elected,” said Bill Brunia.  “If he would have ran, I think he would have been in now. We wouldn’t have this mess we’re in right now.”

Huckabee told a small group of  reporters late Sunday night that he has “strong personal connections” in Iowa and that’s why three Iowa cities are stops on his book tour.

“The reason I’m here is that it makes sense for me, on a book tour, to come to Iowa,” Huckabee said. “I do not have any political plans for the moment.  I really don’t. Everyone assumes I do, but if you looked at my schedule you’d know I don’t have time right now to sit around and try to plot some political comeback.”

Huckabee said he would be coming back to Iowa in the coming year, as he intends to campaign here on behalf of Bob Vander Plaats, a Republican candidate for governor who endorsed Huckabee in 2007 and campaigned extensively with Huckabee in Iowa.