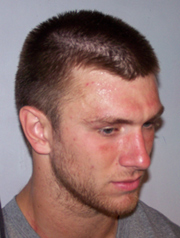 Iowa coach Kirk Ferentz expects quarterback Ricky Stanzi to miss the final two games of the regular season after undergoing surgery on his injured ankle on Monday. Ferentz says there is a good chance the junior signal caller will be ready to play in the Hawkeyes’ bowl game.

Ferentz says the positive will be the break before a bowl game and it will be beneficial for Stanzi to get healthy. At his weekly news conference in Iowa City Ferentz did not completely rule out a Stanzi return for the final regular season game against Minnesota but says it is highly unlikely.

Ferentz says these type of injuries typically take three or four weeks, but everybody is different. Ferentz says Stanzi will make the trip this week when the Hawkeyes visit Ohio State. The winner earns a trip to the Rose Bowl. Ferentz says Stanzi’s role now is to be a tutor to the other two quarterbacks and he says that will help Stanzi keep involved.

Redshirt Freshmen James Vandenberg and John Wienke are the top two on the depth chart. Vandenberg was nine of 27 in relief in the Hawkeyes 17-10 loss to Northwestern. Ferentz says both have done a good job in practice and throw the ball well, and the only thing they lack now is experience.

Ferentz says Vandenberg has a bright future as he is walking into a tough order with Ohio State’s defense. He says Vandenberg will get good support and he will not measure his ability over the next 60 minutes. Ferentz says he has total confidence in his play.

Ferentz says the players don’t need to be reminded about what is on the line this weekend. “We all know what’s at stake and..it’s gonna be important that we win the next week too,” Ferentz says. He says all the games will be important with tiebreakers and everything else.

The defense has been the key this season and that unit will need a big day against the Buckeyes. Ferentz says for them to win common sense will say they need to play good defense, as he says the Buckeyes will play good defense and even with everyone healthy, it will be tough to score points.

Iowa has played its best football on the road this season and that trend needs to continue. Ferentz says it’s not their first road trip and they have handled things on the road. He says that’s a positive, but he doesn’t know if it will be enough this week.

Iowa has been an underdog in several road games this season and Ohio State is favored in this game by more than 17 points. Ferentz says being the underdog seems to be their lot in life. “So we’re on the road, we’re underdogs and we’ve got them right where we want them, it’s perfect,” Ferentz says.