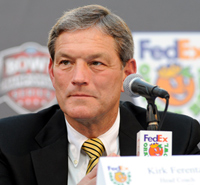 The 2003 Orange Bowl game against U.S.C. was by far the worst bowl performance by a Kirk Ferentz coached Iowa team. The Hawkeyes were beaten by U.S.C. 38-17 and while they are hoping for a better result tomorrow night against Georgia Tech quarterback Ricky Stanzi says the coaches are not trying to use that loss as motivation.

Stanzi says they don’t feel like they need any revenge, as most of them weren’t there. He says they just want to be ready to play regardless of the name of the bowl.

Senior center Rafael Eubanks says the 2003 game was a valuable lesson for the program. Eubanks says after the game there was a transformation of the month leading up to the bowl game. He says the focus wasn’t what it needed to be and this time they will be better prepared.

Receiver Trey Stross says the change in philosophy has made the Hawkeyes a better bowl team. He says the approach has changed and that’s why have have been able to compete with Texas, LSU and Florida. Safety Brett Greenwood says he remembers the ’03 Orange Bowl. Greenwood says he was there and realized what happened and the coaches have done a good job of making sure they are prepared and avoid the distractions.