You are here: Home / Weather / Snow clean up continues as more is on the way 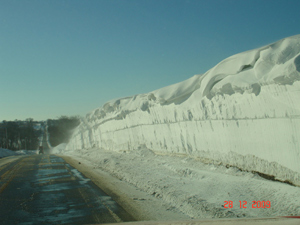 Another winter storm bearing down on Iowa is raising concerns across parts of the state that are still trying to recover from the Christmas blizzard. Dena Gray-Fisher is a spokesperson for the Iowa Department of Transportation.

“We’re still trying to assist the counties in many areas dig out where they have very large drifts,” Gray-Fisher said. “So, this is really poor timing especially with the very dangerous wind chills and gusts of around 40 miles per hour expected with this storm.”

“Some of (the drifts) are 15 feet or higher,” Gray-Fisher said. “They go for a number of miles. On many of the county roadways, you really couldn’t distinguish where the road was.” An emergency proclamation from the Governor’s office cleared the way for state assistance in Monona, Audubon, Crawford, Harrison, Pottawattamie and Shelby counties. The approaching storm could cause more problems in those counties – including power outages.

Gray-Fisher says some power lines in that area of the state remain coated with 3 to 5 inches of ice. Individuals who plan to venture out over the next few days are encouraged to plan ahead in case they become stranded in their vehicle. Gray-Fisher says motorists should start the trip with at least a half tank of gas, pack a winter survival kit and carry a cell phone. Motorists who do become stranded are advised to remain with their vehicle.