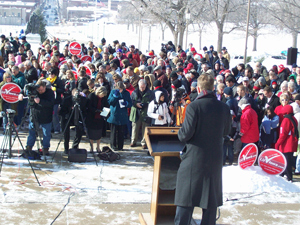 Chuck Hurley addresses "Let Us Vote" rally at the capitol.

Danny Carroll, a former Republican legislator who is chairman of the PAC’s board of directors, denounced the G.O.P. during a statehouse rally this afternoon.

Carroll also said former Governor Terry Branstad is a candidate who is “lacking” when it comes to opposing gay marriage. “(Branstad) has failed to boldly address the values that we embrace and even if he were to win the (Republican Party’s) nomination, the Iowa Family PAC will not support him,” Carroll said.

“Amen,” a man in the crowd shouted and another person hooted, but the crowd did not clap after that Branstad slap.  Instead, the gay marriage opponents renewed their cheering a few seconds later when Carroll introduced Vander Plaats as “the person” to support in the gubernatorial race.

“I will do everything in my utmost being to honor this endorsement with all the integrity that I can muster,” Vander Plaats promised the crowd. 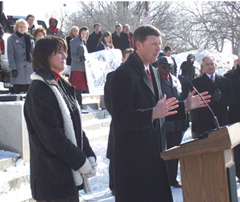 Vander Plaats repeated his pledge to “stand in the gap” and try to end gay marriage in Iowa.

“On day one, as your next governor, I will issue an executive order that places a stay on same-sex marriages until the people of Iowa have a right to vote on that issue,” Vander Plaats said, to applause.

Tim Albrecht, a spokesman for Branstad’s campaign, issued a written statement via email.

“The only endorsement that matters is from the voters on election day,” Albrecht said, adding the Branstad has been a “clear” supporter of traditional marriage.

A few dozen of the “Let Us Vote” rally-goers sat through Governor Chet Culver’s Condition of the State address this morning.  The outdoor rally drew several hundred people who stood in the cold for over half an hour, culminating in a chant.

The group’s “Let Us Vote” campaign seeks a statewide vote on a constitutional amendment that would ban gay marriage in Iowa.  The top two Democrats in the legislature say they won’t allow a resolution to pass which would set up such a vote.

Supporters of gay marriage also gathered at the statehouse today.  Several donned white t-shirts with a blue dot in the center and sat in the balcony to listen to Governor Culver’s speech, too.

Listen to the entire 23-minute-long rally.