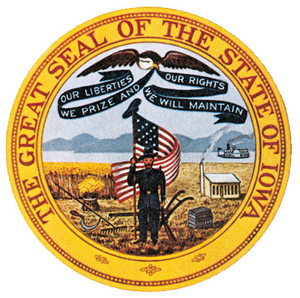 The Great Seal of the State of Iowa

A northeast Iowa lawmaker says it’s time to correct an embarrassing phrase that’s been in Iowa law since 1847.  Representative Ray Zirkelbach wants to change the legal description of “The Great Seal of the State of Iowa.”

In the middle of the official state seal is a soldier, holding an American flag with a gun at his side.  It’s the plow that’s behind the soldier in the picture that is the issue.  The legal description of the seal mentions the soldier and that there is a  “plow in his rear.”

Zirkelbach, a Democrat from Monticello who is chairman of the House Veterans Affairs Committee , wants that ridiculous phrase or “malapropism” to be corrected.

“I said the media will pick up on this right away and people will say, ‘Don’t they have better things to do in Des Moines?’ However. it’s kind of germane to my Veterans Affairs subject because the citizen-soldier is the National Guardsman and they shouldn’t be identified in that kind of manner,” Zirkelbach said during an interview with Radio Iowa.  “So I agreed to submit it and change it and I’ve had people come up to me and say that they’ve waited 30 years for somebody to do that.”

Zirkelbach said one of his constituents, a man from Anamosa, brought the phrase to his attention. “I believe his mother was an English teacher and thought that the wording was wrong and that, if anything, the State of Iowa should have the correct wording in there for ‘The (Great) Seal of the State of Iowa,'” Zirkelbach said.

Zirkelbach admits  “a few” of his colleagues have teased him about his proposal, but he’s undeterred. “We are the education state, so we need to be a model for our students.  We need to make corrective changes,” Zirkelbach says.  “So a teacher would always have their students correct their work if it was wrong, correct?”

And Zirkelbach has a teacher in his background who he believes would be proud of his effort. “I’m sure my great-grandmother who taught in a one-room schoolhouse who (died) about 20 years ago would be happy with me,” Zirkelbach said, then laughed.

Zirkelbach doesn’t expect his proposal to be on a fast-track at the statehouse, however, and admits it may never even emerge from a committee.