You are here: Home / Politics / Govt / Debate on government reorganization is on the legislature’s agenda 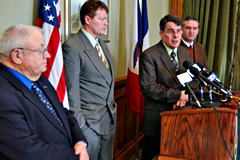 The push to find tens of millions of dollars in savings in state government will resume this week at the statehouse as the Iowa Senate begins debate on a government reorganization plan.

“We’re moving quickly on that legislation so we’ve got a handle on what the savings are,” Gronstal says.

Once lawmakers come up with a figure on how much may be saved, they’ll start drafting a spending plan for next year. The spending plan Governor Culver unveiled last Wednesday suggested as much as 341 million in savings could be achieved by downsizing and reorganizing government operations.

Gronstal, though, says the preliminary cost-savings that will be achieved by what senators plan to debate today (Monday) is closer to 200-million.

“We all want to kind of get to the same place, from point A to point B,” Gronstal says. “The route we take to get there may differ a little bit, but we’re working very closely with the governor’s office.” Republicans are in the minority in both the House and Senate, which means Democrats control the debate agenda. Republicans, however, aren’t threatening to dig in their heels.

Senate Republican Leader Paul McKinley of Chariton says, “We will cooperate and encourage the Democrats if they mean true, meaningful reorganization of government. If not, we will stand opposed…..There are some troubling indications that it may be just shifting the deck chairs and so we’re looking into that, but if we can actually save money, we’ll be supportive.”

On Tuesday, the Iowa House will debate a separate package which would provide incentives to long-time state employees who choose to retire early. House Speaker Pat Murphy, a Democrat from Dubuque. “We feel like we need to know what our cost savings are both from early retirement and from state government reorganization before we can proceed on the budget,” Murphy says. “So those two things have to be done first.”

House Republican Leader Kraig Paulsen of Hiawatha says “some” Republicans in the House will oppose the plan that would offer a bonus to long-time state employees who agree to retire early along with other incentives. Paulsen says G-O-P lawmakers in the House have been working “a lot closer” with key House Democrats on government reorganization, the other piece of the package.

“I continue to have the expectation that that will continue and my hope is we will have something substantive,” Paulsen says. “I can’t imagine right now, based on the discussions that we’re having, that it’s going to come anywhere near the $341 million gap that the governor has created, but I’m anticipating right now having a bill that I’m going to be able to support.” The Senate is scheduled to begin debate on the state government reorganization bill at 10 o’clock this morning (Monday).