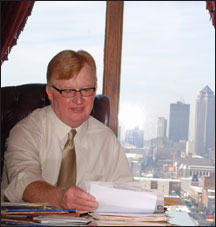 Another Republican has formally entered the race for the job of state treasurer. Dave Jamison of Ames held a statehouse news conference today to kick-off his campaign.

“My candidacy for state treasurer is about putting Iowa’s financial future back on track,” Jamison said. “We are on the wrong track and we need new leadership.”

State Treasurer Michael Fitzgerald, a Democrat, plans to seek reelection to an eighth term in November. Jamison, who currently serves as treasurer for Story County, faces Dyersville Mayor Jim Heavens in the Republican primary this June for a chance to face Fitzgerald in November.

“The sagging Iowa economy and failed political leadership in Des Moines point to a very critical election this fall and this election will be an opportunity for hard-working Iowans in every corner of this state to send a loud and clear message to our elected officials: Enough already,” Jamison said. “Iowans will no longer tolerate a government that continues to grow and spend with no clear sense of priority or proportion at a time when Iowa families and businesses are being forced to tighten their belts.”

Jamison in particular faults Fitzgerald for failing to stop the Iowa Public Employees Retirement System or IPERS from investing in a California firm that eventually lost over $300-million in IPERS investments. “The state treasurer has no job more important than keeping and protecting the public’s funds,” Jamison said. “Iowa’s treasurer must be a custodian in the true sense of the word. When it comes to protecting the treasury and IPERS, I will put Iowa first.”

Fitzgerald says the state treasurer doesn’t invest IPERS money, a staff of 80 people do. Fitzgerald is one of 11 people who serve on an advisory board for the state pension system and Jamison says Fitzgerald missed the warning signs about that California investment firm. Fitzgerald says 75 percent of the money lost to that firm has been recovered.

“If you’re gonna also give the treasurer all the blame, then let’s give the treasurer the credit. For the last 25 years, IPERS has been the top pension fund in the country on investment returns,” Fitzgerald says. “Last year, even with that loss — which it isn’t; it’s been recovered — but even accounting for that we still had over a 16 percent return which was better than any other pension fund in the country.” Fitzgerald dismisses some of Jamison’s other critiques.

“You know, you get candidates and typically they just throw mud at the wall and hope something sticks,” Fitzgerald says. “…But so far, there’s no issues here.” Fitzgerald is in his 28th year as state treasurer. Jamison, a former Marine, has served as Story County treasurer for the past 16 years.