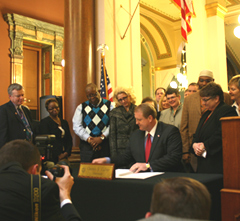 It also seeks to reduce the number of “middle managers” in state government. Representative Mary Mascher, a Democrat from Iowa City, started working on the reorganization project last summer and she spoke shortly before the governor signed the bill into law.

“The bill is the largest reorganization effort in the history of the state,” Mascher said. Senator Staci Appel, a Democrat from Ackworth, worked alongside Mascher for the past eight months to craft the legislation. “Some of these decisions were simple solutions,” Appel said, “and others were difficult and tedious to sort out.”

Most Republicans in the legislature voted for the reform package and while a few dozen Democrats from the House and Senate stood behind Culver for today’s bill signing, only one Republican lawmaker attended the event. Top aides to Republican legislative leaders say there was no organized boycott by Republicans and Culver, a Democrat, praised Republicans for joining Democrats in passing the bill.

“It was a nearly unanimous vote, a bipartisan vote, so the Iowa taxpayers won,” Culver said. “We’re doing something here today that is not happening a whole lot around the country. We’re working in a bipartisan way to get the people’s work done.” According to the governor, he and legislators have taken a series of steps in the past few months that will save $270-million.

“It’s a huge step forward,” Culver says. “Obviously, we’ll continue to make efficiency a top priority whether it’s in the rest of this session or in the future.” Culver hired a consulting firm which offered other recommendations, including the idea of using a portion of state gas taxes to finance the operations of the Iowa State Highway Patrol. Legislators from both parties were reluctant to divert gas taxes from the fund reserved for road and bridge construction. Culver is ready to stop pushing the idea.

“We realize that this session that’s not going to happen,” Culver told reporters. “But that’s o.k. as long as we find the appropriate resources to fund the Department of Public Safety and keep our roads safe.” Some portions of the government reorganization plan took effect immediately, around noon today.

One change has prompted some problems for the state’s Alcoholic Beverages Division and retailers who’ve been selling higher-alcohol-content beer to bars and restaurants. The bill allows distributors to sell the higher “proof” beer directly to bars and restaurants, cutting out the “middle man.” It means the state’s liquor warehouse and the retailers who’ve been serving as “middle man” in that equation are now trying to unload thousands of dollars worth of high-alcohol-content beer.