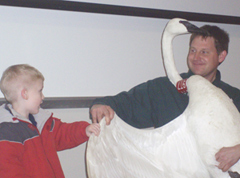 The Iowa Department of Natural Resources reports its efforts to protect the largest waterfowl in North America are going well. A pair of rare trumpeter swans was released into a controlled habitat last week at Kirkwood Community College in Cedar Rapids.

The D.N.R.’s partnership with the college is an effort to further repopulate the species in Iowa. D.N.R. wildlife researcher Dave Hoffman says cooperation with sites throughout the state is key to the trumpeter swans’ recovery.

“Both of these birds are flightless and can no longer make it into the wild but they can be placed into captivity where they can breed and produce cygnets, which are baby swans which will be released into the wild and will ultimately restore trumpeter swans back to the state,” Hoffman said. The program to protect trumpeter swans in North America began in Iowa in 1995 – after a 115 year absence. Jerry

Reisinger is an instructor in the parks and natural resources program at Kirkwood. He says the partnership allows Kirkwood to provide good activities for students and helps the DNR build the swan population in Iowa. Around 750 cygnets have been released into the wild, however 70% don’t make it to breeding age. There are currently about 50 nesting pairs of trumpeter swans throughout the state, with most in northern Iowa.