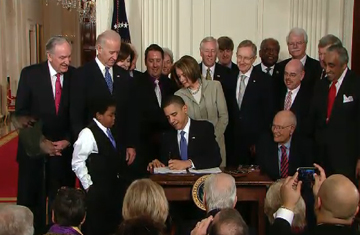 Braley says it was an honor to be part of such an “historic” occasion. “We fulfilled a dream that we have been pursuing as a country for nearly 100 years to try to provide quality health care coverage to all Americans,” Braley says. “And being there, having campaigned on comprehensive health care reform in 2006 and 2008, and having spent a lot of times talking to my constituents about the problems with our current health care system, it was one of the highlights of my life.”

Senator Harkin called it a “poignant moment” to be there for today’s bill signing and see history in the making.  Braley described the scene during an interview with Radio Iowa. “It was part pep rally, part victory celebration,” Braley said.  “But more than anything, it was a time to reflect on the people who are not benefitting from our current broken health care system and that’s why the president cited specific examples of people who’ve been left out of the health care system through not fault of their own and whose lives have been negatively impacted by it and why this bill will make a difference and make sure others don’t go through that same pain.”

Senator Harkin said in a written statement that there was a “hard-fought battle” to get to today, but Harkin said the “hundred year struggle to provide affordable, quality health care coverage is over.”

Republicans propose legal action to try to halt implementation of the plan.  Congressman Steve King, a western Iowa Republican, says the fight over health care is far from over.  Congressman Braley, who is an attorney, said few of these kind of legal challenges have been successful. “There is a strong presumption in the constitutionality of what congress does,” Braley said.

Obama today called the health care bill an “extraordinary achievement” and he said congressional Democrats “did what was right” in passing the legislation.  Braley was among a handful of negotiators who worked into the early morning hours of Saturday, hammering out key details of the package.