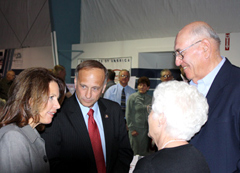 The two Republicans helped organize some of the recent “Tea Party” rallies in Washington, D.C. and both favor repeal of what they call “ObamaCare.”  On Saturday night in northwest Iowa, Bachmann called King her “best friend in congress” and King lauded Bachmann for her political instincts.

“We’ve got to shoot from the hip sometimes,” King said. “It’s not always ready, aim, fire.  Sometimes it’s just time to fire and you’d better have good instincts so that you can shoot and it might look later like you didn’t shoot from the hip but you took careful aim. That’s ’cause your instincts brought that about.”

About 500 people paid $50 per ticket to hear Bachmann and King speak at a meeting hall in Sergeant Bluff, a Sioux City suburb.  Bachmann told the crowd she is a native Iowan who pleaded with her parents not to move north.

“I will never forget the day in sixth grade when my parents came to tell us that my dad had taken a job at Honeywell up in Minneapolis and they were asking us — not asking —  telling us that we were going to move up to Minneapolis and I remember crying. The tears came down my cheecks and I said, ‘I just don’t want to leave Iowa.  I love Iowa,’ and I said, ‘Des Moines is our capital.  How can I move to another state where Des Moines is not our capital?’ My tears had no effect on my parents.  We moved anyway,” Bachmann said.  “But I’m back here today to be here with all of you.”

Bachmann’s mother was from Mason City and both her parents were graduates of Waterloo East High School.  Bachmann, who was born in Waterloo, lauded the State of Iowa and the Iowa Caucuses which are the first contest in the presidential selection process.

“Just a great state (with) the best people, the most down-home people, family people and I think that’s why the Caucuses — the political Caucuses — need to always start here in Iowa because it’s kind of the center of the nation, but it’s also the heartbeat of the nation where the real people in this country are really at, what the real people think about Washington, D.C. is thinking.  Don’t you think that’s true?” Bachmann asked the crowd and she got a wave of applause.  “I think Iowa gets it.  I think Iowa people get it.”

Bachmann got a standing ovation from the crowd when she predicted Barack Obama would be a one-term president.  During an interview with Radio Iowa, Bachmann danced around the question of whether she might run for the Republican Party’s presidential nomination in 2012.  “I truly believe that President Obama will be a one-term president.  I have no doubt.  I’ve talked to Steve King many times and I’ve told Steve King, ‘Why don’t you run for president of the United States?’  I don’t know that our candidate has emerged yet for 2012,” Bachmann said. “The one thing I do know:  we need a rock-solid, bold, courageous, constitutional conservative — no substitute — running for president for 2012 and I think we’ll find that candidate.”

King didn’t downplay Bachmann’s “Draft King” sentiments. “I want to serve my country in the most effective way I can and I don’t know how that is…Whatever’s in store for me I want to be as effective as I can be. I want to be as clear a voice as I can be. I know presidential candidates will come to Iowa. Actually, I’m a person that can come to Iowa without starting rumors. I just happened to think of that while you were asking the question,” King said and Bachmann, who was standing beside King, laughed.  “But I know they’re going to come here and they’ll continue to come here and I want to sit down with them. I want to have those conversations. I want provide for them, as much as I can, access to Iowans – Iowa Caucus-goers — and engage in this debate and we’ll see.”

King said he wants to “test” the candidates who are considering a run for the White House to find out if they’re a “rock-ribbed” conservative.