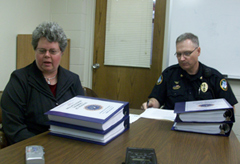 No charges will be filed in connection with the death of a man who died outside of a bar in the southeast Iowa town of Washington. Fourty-five-year-old Robert Thomas Blankenship was found unconscious after a brawl outside the 4th Avenue Bar and Grill in late November.

He later died at the University of Iowa Hospitals and Clinics. Washington County Attorney Barb Edmondson says an investigation showed that Blankenship died after being struck by Brandon Eichler of Michigan.

“The evidence from witnesses was that Mr. Blankenship was the aggressor and he initiated the contact with Brandon Eichler and assaulted him first,” Edmondson said.

Investigators say Eichler responded with a “single blow” and did not use a weapon. Edmondson says Eichler was in town on business and had never met Blankenship prior to the incident.

According to the state medical examiner’s report, Blankenship died of a tear in a vertebral artery near the brain stem, which caused brain bleeding.