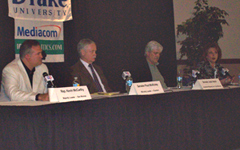 Four leaders in the Iowa legislature debated the political forces which may shape the 2010 election this morning, with a Democrat charging Republicans were being “politically unethical” and Republicans predicting voter anger would sweep many incumbents out of office.

Senator Jack Hatch, a Democrat from Des Moines, is an assistant Democratic leader in the Iowa Senate.  Hatch accused Republicans of being “in the driver’s seat” when the national economy went over a cliff.

“This economy took a tumble when the previous (Bush) Administration paid for a war — whether you like it or not — on the debt of future generations.  That’s what created the economic instability amd it came crashing down a year before he left,” Hatch said.  “And to try to deliver a message that it’s the Democrats who have led us into this abyss is not only wrong, it’s politically unethical.”

Representative Linda Upmeyer, a Republican from Garner, is an assistant Republican leader in the Iowa House. “It’s not going to bode well for any party that simply blames someone else and I think people are getting tired of hearing that it’s Bush’s fault for everything that goes on in this state,” Upmeyer said. “I’m not saying he did everything perfectly, but I think we have to stop blaming him. He’s gone, he’s past and I think we need to move forward.”

Upmeyer used the word frustrated to describe Iowa voters. Senate Republican Leader Paul McKinley of Chariton used the word pessimistic. “They’re no longer just angry, they’re scared,” McKinley said. “And they recognize that we can no longer continue on the path that we are on.”

House Democratic Leader Kevin McCarthy suggested Iowa Democrats will stress with voters that things at the statehouse in Des Moines operate differently than things in Washington, D.C. “We have a balanced budget.  We have a few hundred million in surplus.  We are in a very solid position, strong position and we do most of our work in a bipartisan way,” McCarthy said. “And I think when you see our economy turn the corner…I think that, ever so slightly, will change the conversation.”

This morning’s conversation among the four legislators was held at Drake University and organized by IowaPolitics.com.

Listen to the discussion among legislators here: Legislators 16:28 MP3