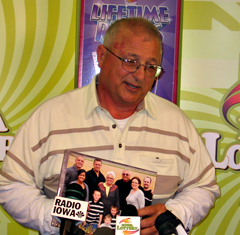 Richard Koenigsfeld speaks with the media while holding a picture of his family.

A northern Iowa man is celebrating a run of good luck after a heartbreaking few months.

Fifty-eight-year-old Richard Koenigsfeld of Marble Rock stopped by Iowa Lottery headquarters in Des Moines today  to claim a one-million dollar prize in the “Lifetime Riches” instant scratch game. Koenigsfeld’s wife Dian — who he referred to as “mom” — died of cancer in March.

Their 27-year-old son Gabe was killed in a construction accident last November.

“It’s been a roller coaster ride to say the least,” Koenigsfeld said at a news conference. “I just wish mom and Gabe were here to enjoy it with me, but I’m sure they are some where.” The Lifetime Riches game costs $20 per ticket.

Last Thursday, Koenigsfeld bought a ticket at a local convenience store – scratched it off in the store and noticed he lost. He bought another ticket and took it home. Koenigsfeld says he normally wouldn’t spent that much money, but he had won $325 a few days earlier at the casino in Northwood.

Koenigsfeld scratched the winning ticket at home and then went back to the convenience store to have the clerk double check that he’d actually won one-million dollars. “We actually sat there and cried for a little bit because it had been something nice that happened rather than all the other things that had happened in my last six months,” Koenigsfeld said. He chose to take a lump-sum cash payment option from the Iowa Lottery, which amounts to $650,000.

After taxes, he’s taking home $455,000. “I’m not going to spend it all on myself,” Koenigsfeld said. “A lot will go to my family and hopefully a lot of it will help me out in retirement. I’m not going to quit my job right away.” Koenigsfeld has worked for 33 years at the Farmers Cooperative in Marble Rock. He’s planning to take some time off and possibly take a trip to Germany.

“My brother called, he has a son who lives in Germany, and they asked me if I wanted to go along to Germany this summer,” Koenigsfeld said. “I haven’t decided if I’m going to do that or not, but I told work that I want to take a leave of absence for a little bit to kind of gather myself.” The day Koenigsfeld won the $325 at the casino – April 18th – would’ve been his wife’s birthday. He spent that morning planting her favorite flowers in the yard.

Koenigsfeld believes his lottery prize is Dian’s way of looking out for his future. “I certainly do. That day I planted the flowers, I did a lot of talking to myself…I never would’ve expected this,” Koenigsfeld said. Koenigsfeld brought a framed picture of his family to the Iowa Lottery office. The photo was taken on November 14, 2009 – three days before his son Gabe was killed.