You are here: Home / Sports / McDermott takes over as Creighton coach 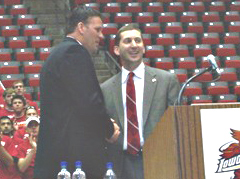 Greg McDermott was introduced this morning as the new head coach at Creighton. McDermott resigned as the Iowa State coach on Monday and replaces long-time coach Dana Altman at Creighton. Altman was named the new coach at Oregon on Monday.

McDermott says when he took the Wayne State job 14 years ago they were coming off a 7-20 season, and he says U.N.I. was 7-24 when he took that job. He says they were truly rebuilding jobs, but he says Creighton is not. McDermott says Altman did an unbelievable job building the program to the level it is, and knows he has big shoes to fill and he takes that very seriously.

McDermott never had a winning season in four years at I.S.U.  but says he is a better coach and better person because of the experience. He says his relationship with Athletic Director Jamie Pollard and womens’ coach Bill Fennelly and the friendship he forged with them and the things they taught him are “invaluable.”

The Cyclones were 15-17 this past season and McDermott’s four year mark was 59-68. McDermott says they faced some adversity at Iowa State as he says it seemed that whatever could go wrong, did go wrong. He says he was fortunate to have a support system to get through those times and says “Our family wouldn’t trade our experiences in Ames for anything, we’ve made some lifelong friends there, and for that reason it was difficult to leave.”

McDermott says he is happy to be back in the Missouri Valley Conference. McDermott led U.N.I. to three straight NCAA Tournament appearances before taking over at Iowa State in 2006. He says it is a league where the teams care about each other and the decisions that are made are in the best interest of the league and sometimes you have to put your own interests aside.

McDermott will also get a chance to coach his son at Creighton. Doug McDermott helped lead Ames to back-to-back 4A state championships and will join the Creighton program after originally signing with U.N.I. McDermott says they both talked to U.N.I. coach Ben Jacobson and says he was “100-percent in support of Doug having the opportunity to play for me.” He says there is a process to go through, but he is confident that will not be a problem because of Jacobson’s support.