You are here: Home / Crime / Courts / Looking for crisis manager at IASB 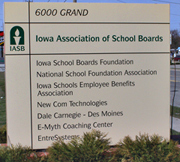 Within the next week the Iowa Association of School Boards likely will have a new interim director, someone who’s had experience in handling a “crisis in the past.”

The association’s former executive director is under scrutiny over allegations of inflated salaries and questionable spending decisions and she was fired in late March. Iowa Association of School Boards spokeswoman Megan Forgrave says the group’s board of directors plans to name an interim director in the next few days.

“The board just feels this is not the time to try and take on a big search process so what they’ve done is go out to experts in the field, gotten some recommendations, taken people’s names who’ve said they’re interested in the position, held some interviews,” Forgrave says. “They’re doing some background checks and they want to make sure they’re very, very thorough in that this time around.”

The association’s long-time executive director retired last year and the group hired Maxine Kilcrease as his replacement. Nolden Gentry is the attorney who was hired in March to sort through the group’s affairs.

“I think that there are a number of board members who are concerned that they didn’t go far enough last time and so we want to try to avoid that this trip,” Gentry says. “We want to do our due dilligence before we select and designate a person who comes into a pretty bad situation and tries to make it better.”

According to Gentry, the candidates for the interim role as director of the association are four people who have run school districts that “have had some degree of crisis in the past.”

Two members of the group’s board of directors have resigned, including the man who went on the board in January as the treasurer for the Iowa Association of School Boards.  In addition, the group’s past-president has resigned. Jack Hill, a member of the North Scott School board, had been on the Iowa Association of School Board’s executive board for eight years. What looks like Hill’s signature is on a document that outlined a hefty salary hike for Kilcrease just a few months after her hire.  Hill told The Des Moines Register he had signed the document, but later said he had not.