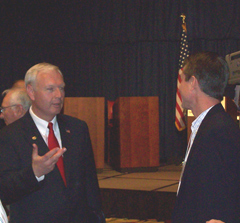 The three candidates vying for the Republican Party’s 2010 gubernatorial nomination say the State of Iowa and local authorities should crack down on people who have entered the country illegally.

In addition, the Republican candidates would not allow the children of illegal immigrants — whether the kids were born in the U.S. or not — to pay the cheaper, “in-state” tuition at the three state universities.

The three candidates appeared this afternoon at a forum sponsored by the Iowa Broadcast News Association and Bob Vander Plaats, a business consultant from Sioux City, said it’s time for the state to do something to curb illegal immigration. “I don’t know about you, but I do know about me,” Vander Plaats said.  “I’m tired of relying on the federal government.”

Arizona just enacted a law that requires local authorities to question someone if there’s “reasonable suspicion” to believe they’re in the country illegally.  Former Governor Terry Branstad supports a similiar move here, although he said Iowa’s law shouldn’t be identical to Arizona’s.  “We’re not Arizona.  We’re not a border state,” Branstad said.  “We ought to do something that fits the needs of our state — Iowa.”

State Representative Rod Roberts of Carroll suggested the state could save millions if illegal immigrants are barred from signing up for government welfare payments. “Remove the incentive for being here and they will relocate somewhere else,” Roberts said.  “I believe we should require people to verify that they are actually who they are when they apply for benefits from the State of Iowa.” 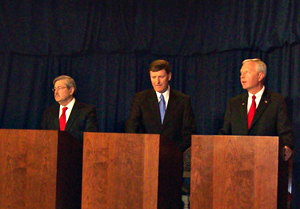 The three candidates were asked if they would allow the children of illegal immigrants to attend the state-supported university in Ames, Cedar Falls and Iowa City and pay in-state tuition.  All three said even if the child was born here and is considered a U.S. citizen they should be charged out-of-state tuition rates.