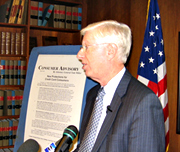 Culver has publicly called on the Racing and Gaming Commission to grant four new casino licenses. The state Division of Criminal Investigation has been reviewing three Culver campaign contributions which came from employees of Peninsula Gaming.  That’s the company seeking a license for a new Fort Dodge casino.

Donn Stanley, a former deputy in the attorney general’s office, has just left to take over Culver’s reelection effort.  Attorney General Tom Miller says he believes there’s no “actual” conflict of interest in having his office involved in the investigation of those campaign contributions, but Miller says there is an “appearance of a conflict of interest.” That’s why Miller’s recommending the state Executive Council hire a special prosecutor to work on the case.

Governor Culver has issued a written statement, saying “every candidate for public office expects that contributions to their campaigns will be lawfully made.”  Culver said he has no reason to believe anyone in his office or on his campaign staff “is a target in the investigation.”

The attorney general is recommending that Des Moines attorney Larry Scalise be hired as the special prosecutor. Scalise served as chairman of the state Racing and Gaming Commission in the 1980s, during the first five years of Republican Governor Terry Branstad’s administration. Scalise has served as a special prosecutor for the federal government.  Scalise was also chairman of the Iowa Campaign Finance Disclosure Commission in the 1970s — during Republican Governor Robert Ray’s administration.