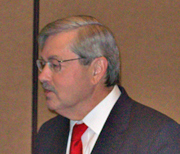 “The governor went in for a routine angiogram and in the process of that procedure they located a partially-blocked artery in his heart and the doctor performed a procedure where he inserted a stent,” said Jeff Boeyink, Branstad’s campaign manager.

The doctor has declared the procedure a “complete success,” according to Boeyink.  Boeyink talked with Branstad on Wednesday afternoon. “The governor was feeling good,” Boeyink said during a telephone interview with Radio Iowa. “…We expect he’ll be back in action here in the next couple of days.”

Branstad served as Iowa’s governor for 16 years and had a heart attack in December of 2000, about a year after he left office.  Doctors inserted a stent in his heart back then to keep an artery open and Boeyink said Branstad now has had a “second” stent inserted.

“The nice thing about what Governor Branstad does is he practices what he preaches,” Boeyink said. “He has a rigorous wellness routine and this was caught because he had a routine appointment with his cardiologist and the stress test indicated there might be a problem and that’s why this procedure was undertaken.”

The Branstad campaign released a written statement from Branstad’s doctor, who stressed that the former governor did not have another heart attack. The cardiologist said Branstad should be “fully capable of performing the activities of a candidate and a governor.”

Branstad was 54 when he had the heart attack in 2000; he is now 63 years old.  Boeyink said Branstad engages in “rigorous” workouts and his physical fitness are a plus in this situation.

“In today’s day and age, this is a very common procedure.  It’s one of the most common procedure involving the heart,” Boeyink said.  “The doctor indicated that if Governor Branstad were a construction worker, he’d have him back on the job in three days.”

Two other Republicans are running against Branstad for the G.O.P.’s gubernatorial nomination.  The primary is June 8th.

In 1990, a couple of weeks before that year’s primary, Democratic gubernatorial candidate Don Avenson had a balloon procedure to open a clogged heart artery. Avenson went on to win his party’s nomination for governor in June, but he lost the general election to Branstad.