After several years of plans, lobbying, and discussion, four Iowa counties will find out today if they’ll get a casino license. Radio Iowa’s Dar Danielson has a preview:Danielson report 1:27 MP3 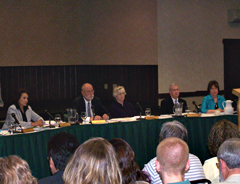 Racing and Gaming Commission members listen during a public hearing on new licenses May 4th.

The commission last approved new licenses on May 11th of 2005 — applications from Fort Dodge in Webster and Ottumwa in Wappello County were among those turned down back then. There are new proposals from those counties this time around and they are joined by proposals from Lyon and Tama County.

Over the last couple of months, all four counties have had their chance to make a pitch to the commission.

Those who think 17 casinos is enough for the state got a chance to voice their opinion during the commission’s public hearing.

The lobbying for licenses rose above the local and county level when Governor Chet Culver, a Democrat seeking re-election, sent a letter to the commission saying all four applicants should get a new license.

And there is also some legal controversy, as the D.C.I. announced it is investigating donations made from some Fort Dodge casino backers to Culver’s re-election campaign to see if they were legal. In the end though, the awarding of new licenses will likely come down to one thing — financing.

Commissioner Toni Urban called financing the most sensitive issue during last week’s public hearing on the new licenses — and doubts about the ability of a group to come up with the financing were likely key as the commissioners debated their final decision heading up to today.

The Lyon County group was the only one to not undergo extensive questions about their financial backing at last week’s commission meeting. Today’s meeting begins at 10 a-m in Johnston.