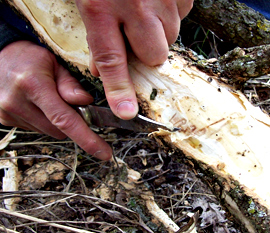 Limb from tree infected with the emerald ash borer.

State officials said today the emerald ash borer has been found on the doorstep of the state. Agriculture Secretary, Bill Northey, says the destructive bug was found along the state’s eastern border.

Northey says it’s on an island out in the Mississippi River and is considered to be in Allamakee County. He says it is very close to an infestation that was found in Victory, Wisconsin, and they had suspected there could be something there.

Northey says the island is only accessible by boat and is not inhabited unless someone would boat over and camp there. Northey says they are not recommending any actions by homeowners with ash trees at this point. The bug destroys ash trees.

D.N.R. director Rich Leopold says it’s good they have detected the bug early. “I would say this news is unwelcome, but not unexpected, we in the team of state and federal agencies and academia have been looking at this for awhile,” Leopold says. He says they have some 1,800 traps set up to try and find the bug early, with most of the traps set up along the border counties.

Leopold says this discovery is no reason to panic, and he wants everyone to continue camping and other outdoor activities.

But Leopold says they are asking that people get wood for campfires at the campsites, as he says all of the state parks are working together to look for people moving wood. 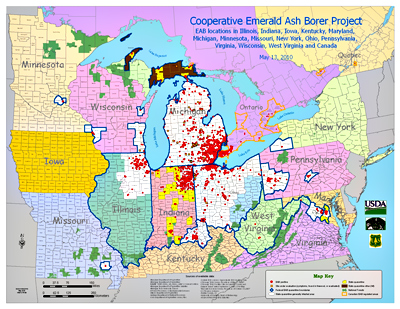 Northey says not moving around wood is a key to slowing the progress of the bug. Northey says they can move several miles, but often the emerald ash borer will only move a mile a year.

He says that’s why it is important to not move firewood anywhere in the state to prevent helping the bugs move.

Leopold says it’s important to do whatever the state can to slow the progress, but he says it’s a matter of “when” not “if” the bug will eventually spread to other areas of the state. “So whether it’s one year, ten years or 100 years, things have a way of spreading around,” Leopold says,”eradication efforts are likely not going to be successful in the long term.” He says the bug was found in Michigan five or ten years ago and has continued to spread naturally and with leapfrogging help of humans.

Leopold says they need to be aware of the possibility as cities plant new trees, and he says they hope it is a long time before it spreads across the state. State officials estimate that five to six percent of the trees in rural areas are ash trees, and say there’s no real estimate of how many there might be within cities. It could range as high as 50% in some areas.