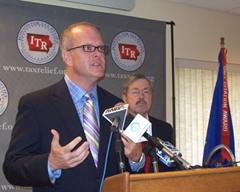 The group Iowans for Tax Relief today endorsed Terry Branstad in the June Republican primary for governor. I-T-R president, Ed Failor Junior, made the announcement at the Ankeny airport and says it’s a first for the group.

“We have not ever endorsed a candidate in a primary for governor, Democrat, Republican, we haven’t taken that step,” Failor said, “but the status quo isn’t serving us. We have to do something different. We’re an organization that’s never been about the status quo. We have recruited candidates against Republicans members of the Iowa Legislature who frankly were no friend of the taxpayer, and we took them out, because that was in the best interest of Iowa taxpayers. The status quo doesn’t work.”

“I would say the biggest one that we ever had issue with was federal deductibility, you know at the end of the day to be completely frank, we prevailed. And I think the governor since has learned,” Failor explained Branstad agreed with Failor.

Branstad says he wants to make sure the state budget holds to required spending limits and also wants to reduce tax rates. Branstad says he reduced rates before. He says he first has to “get the state’s fiscal house in order” and once that is done he wants to reduce the commercial property tax, the corporate income tax and the personal income tax rates. Branstad and Failor are flying out of Ankeny for stops in Sioux City, Mason City, Cedar Rapids and Davenport today to announce the I-T-R endorsement.