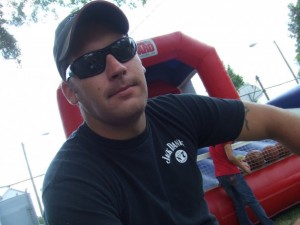 A southwest Iowa man who was shot three times Monday afternoon by an intruder says he noticed something strange when he got home from work.

Matt Herring left his construction job in Atlantic early and got home at about six o’clock, but the doors of his home near Corning were locked. They’re usually unlocked.  Then he saw something in a window.

“I didn’t see a face.  I just saw like a silhouette of a person in there and I thought, ‘Well, somebody is in the house and that’s kind of crazy and then there was like a split second and he fired three rounds and I caught all three of them, I guess,” Herring says, “two in my arm and one in my flank.”

Herring, a 28-year-old Iraq War veteran, spoke with KMA Radio about the ordeal.  After he’d been shot, Herring ran for cover in some nearby trees.

“He tried following me through the timber.  I supposed he was going to try to finish me off or whatever,” Herring said during the telephone interview.

“But I got ahold of my wife and told her not to come home because I’d been shot and I had her get ahold of the dispatch here in Corning and I lost signal with her so I hung up the phone so if somebody called me he wouldn’t hear (the phone ring) and find me and then I heard some rounds from a rifle…At that time it’s when I proceeded to go up the hill to the neighbor’s house.”

Herring was so weakened by the loos of blood that he had to crawl up the hill to reach his neighbor’s home.  He was flown by air ambulance to a hospital in Omaha and released from the hospital on Wednesday.  Herring credits his survival from the gunshot wounds to his military training.

“They teach you how to fix up yourself and other people, but I couldn’t rip my shirt because I only had one arm, so I couldn’t bandage it up,” Herring said. “So I just stuck my fingers in the two bullet holes and proceeded to the neighbor’s house.”

Doctors left the bullets inside his arm. Herring has lost feeling in his arm and some fingers and has limited mobility. Herring knows that healing physically and emotionally will take time. “I’m just taking it one step at a time now.  It’s a pretty traumatizing deal, but I suppose, you know, you’ve got to keep on doing what you’ve got to do, but I guess it really wasn’t my lucky day,” Herring said, before adding: “But it was my lucky day.”

Herring is relieved his wife and four-month-old son weren’t home at the time the intruder entered the house.

Sixteen-year-old Daniel Beardsley, a student at the Clarinda Academy, faces two counts of attempted murder for allegedly shooting Herring and a deputy sheriff.  Beadsley’s also been charged with a series of assault charges and with robbery as authorities say he assaulted a staff member at the Clarinda Academy and stole a vehicle from the academy en route to the stand-off in Brooks, which is just south of Corning.