You are here: Home / Human Interest / Slipknot members remember Gray as “essence of the band” 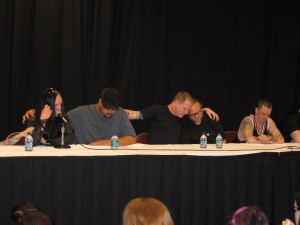 Members of the Des Moines based metal band Slipknot are remembering their bass player, Paul Gray, as a compassionate friend who served as the peacekeeper of the group.

Gray was found dead Monday morning in an Urbandale hotel room. He was 38. Slipknot singer Corey Taylor and other members of the band spoke at a press conference tonight at Wells Fargo Arena, where Slipknot played a concert last year. “We lost a brother,” Taylor said, “and the world seems a little smaller because of it.”

An autopsy performed Tuesday did not yield any clues about how Gray died, but investigators say it confirmed no foul play was involved. Toxicology tests are being performed. Those results are not expected for up to six weeks.

Taylor and the other members of Slipknot did not take questions or discuss the circumstances surrounding Gray’s untimely death. Instead, they spoke about how they hope their bandmate will be remembered. “The only way I can sum up Paul Gray is love,” Taylor said. “Everything he did…he did for everyone around him whether he knew you or not. And that’s what he’s left behind for us – is absolute love.”

Percussionist Shawn Crahan co-founded Slipknot with Gray in 1995. “Paul was there for the very, very beginning and none of us would be on the path that we’re on right now in life, or have the sorts of lives that we have, without him,” Crahan said. “He really was the essence of Slipknot and we would like to have him remembered that way.”

Slipknot is known not only for their loud, intense style of music – but also for their theatrical performances. Each of the nine members of the band wears a mask. Slipknot has sold millions of albums, played around the world and won a Grammy in 2006. Crahan said all of the band’s accomplishments wouldn’t have been possible without Gray.

“He was the person in the band who really wanted everybody in the band to always get along and just concentrate on the band,” Crahan said. “He was a really great friend and just a great person. He’s going to be sadly missed and the world is going to be a different place without him.” 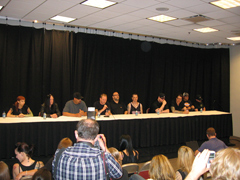 Percussionist Chris Fehn said Gray was a friend first and a bandmate second. “The one thing I’m going to miss the most…man, he gave the greatest hugs out of anybody I’ve ever hugged,” Fehn said with a smile. “You hug a lot of people, but that dude, when he grabbed onto you…you could just feel him and the love he had for you at that moment in time.”

Gray’s wife, Brenna, also sat with the band. She’s pregnant and expecting a baby girl. “Paul was my husband, an amazing person and I just want people to remember him for just that,” Brenna said as she fought back tears.

None of the band members discussed Slipknot’s future. You can listen to the full press conference by clicking on the following audio link:   Slipknot 8:28 MP3