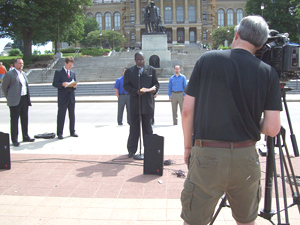 Iowa Family Policy Center president Chuck Hurley says the petitions will be presented to every statewide candidate in Iowa as well as all of the people who’re running for seats in the legislature.

“Whether they see the light, we believe and we hope that they will feel the heat,” Hurley says.  “And that they will recognize that ‘we, the people’ as 31 other states peoples have done deserve…a chance to vote on the Iowa Marriage Amendment.”

Brad Sherman is pastor of the Solid Rock Christian Church in Coralville and also the leader of “Purpose Ministries.”

“To the legislature, we simply say, ‘Stop representing the homosexual lobby that’s based primarily and funded primarily outside of Iowa and begin to represent the people of Iowa that elected you,'” Sherman says.  “‘Otherwise, we believe a pink slip’s coming your way,’ and that’s the message we hope to convey with these petitions.”

Earlier this year, the Interfaith Alliance of Iowa presented legislators with a letter that had been co-signed by 167 Iowa clergy, urging legislators to oppose attempts to “diminish the marriage rights” of gay couples. The Bishop of Episcopal Churches in Iowa signed the letter, as did ministers who serve on several college campuses, including Wartburg in Waverly and Luther College in Decorah.  Unitarian ministers, Protestant pastors and rabbis signed the letter, too. The head of the Iowa Family Policy Center today called some in the Interfaith Alliance group “pseudo” pastors.

“Someone who is a wolf in sheep’s clothing would be the scriptural definition,” Hurley said during a news conference just outside the state capitol. “Someone who would lead their flock astray on issues of moral and particularly spiritual matters and certainly someone who would so directly violate the revealed word of God in all the major faith traditions.”

A spokesperson for the Interfaith Alliance says “people of faith” can disagree and Hurley should “retract” his “disrespectful” statement about clergy who’ve answered God’s call to serve.  During this morning”s news conference Hurley referred to the 800-plus ministers who signed his group’s petition as “real” pastors.

“We are at a crisis moment in this state and we will either stand up for good, Godly, family and marriage or we will go the way of other civilizations that have said, ‘Oh well,'” Hurley said. “We are here on behalf of 834 pastors who are not willing to say, ‘Oh well,’ and we applaud them for that.”

Hurley also blasted the art teacher at a Des Moines elementary school who showed a video to a fourth grade class which some parents found obscene. “And if that doesn’t matter anymore, if we are so callused to the hearts and minds and souls of our young people that we don’t care that they are being morally raped in this state, then we’d better hang it up,” Hurley said.

Click on the following link to listen to today’s 20-minute-long news conference:  cappastors