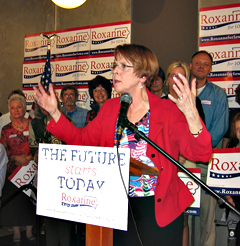 Roxanne Conlin talks to supporters after winning her primary.

Republican Terry Branstad is the G.O.P.’s 2010 nominee to challenge Democratic Governor Chet Culver and Roxanne Conlin is the Democratic candidate who faces long-time Republican Chuck Grassley in the fall election.

Branstad out-distanced two rivals in Tuesday’s Primary voting to continue his bid for a fifth term as governor. “Iowa Republicans have decided that our state is ready for a comeback,” Branstad said to open a brief speech to supporters last night.

Branstad stressed a “change” message. “To those businesses struggling to make the next payroll; to the workers hunting for good work, for good jobs; to those communities fighting to stay alive; to those families hoping for a better education for their kids I say, ‘Change is coming,'” Branstad said.

Branstad served 16 years as governor and left office in January of 1999.  This past October he retired from his job as president of Des Moines University after party insiders searched for a consensus candidate to challenge Chet Culver’s bid for a second term. “For those Iowans who want honest, open and scandal-free government, change is coming,” Branstad said.  “For those Iowans that want a government as good as they are, change is coming.” 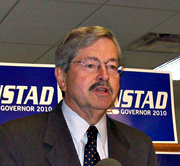 Bob Vander Plaats fell short in his third attempt to win the Republican nomination for governor. Vander Plaats told reporters he feels good about this race and the others he’s run. “You know, I think we’ve won every time to be honest with you,” Vander Plaat said.

“Being a nobody and come within 1,500 votes in ’02; become the lieutenant governor nominee in ’06 and winning in Mike Huckabee in 2008 and then, even in 2010, you know coming within eight or nine points — whatever it is now — of Governor Branstad with all the money and the name I.D. and being four terms as governor — that’s not a bad showing.  We have a very loyal base out here and they’re not going away.  They’re going to stay in the fight. I guarantee they’re going to stay in the fight.”

Some of Vander Plaats’ supporters have said they will not support Branstad in the General Election, but Vander Plaats has agreed to sit down and talk about the differences he had with Branstad. “I think what he and I are going to do is we’re going to sit down and in the business language we say, ‘We’re going to confront the brutal facts,'” Vander Plaats told reporters. “But I think it’s in his best interests, I think it’s in all of our best interests that we come together and we try to unite a party, but not only unite a party, we need to unite a state around some leadership here to advance some goals that we have.”

Vander Plaats refused to elaborate on the topics he wants to discuss with Branstad.  According to Vander Plaats, it will be up to Branstad to see that their meeting happens. “As the nominee, that responsibility is on the nominee’s shoulders, and so that ball’s in his court,” Vander Plaats said.  “I’m willing to meet and he agreed that we do need to meet.  We need to bring some things together here.”

The third place finisher — Rod Roberts — told his backers that it “just wasn’t (his) night” and he’s supporting the G.O.P. nominee wholeheartedly. “Our work continues and each of you in this room I know believes there can be a better Iowa for our kids and our grandkids,” Roberts said. “And that’s worth being engaged in this fight and we continue in that good work.”

Roberts is a Christian minister who has served nearly a decade in the Iowa House of Representatives. When Roberts entered the race last July, there were about half a dozen candidates in the mix. “And one of the things I am most proud of is we successful to emerge as a credible candidate in this Republican gubernatorial campaign,” Roberts said.

Roberts told his supporters that he had no regrets. “There’s been a lot of great experiences in this almost full year of campaigning and what a great opporutnity it’s been, a wonderful honor,” Roberts said.  “There have been some challenges and it has been grueling, but there has been an inner joy about almost every part of it.”

Des Moines lawyer Roxanne Conlin easily defeated Tom Fiegen and Bob Krause for the Democratic nomination for the U.S. Senate. In her victory speech, the 65-year-old Conlin noted that Iowa has never elected a woman as governor or to the U.S. House or Senate. “We share that unfortunate distinction with only one other state — Mississippi,” Conlin said. “I think it’s time that we end that pairing.”

Conlin quickly turned her attention to her opponent in November. Republican Chuck Grassley has served in the Senate since 1981. In his last four elections, Grassley collected at least 66% of the vote. “He will get the race of his life,” Conlin said to a cheering crowd gathered at a downtown Des Moines restaurant.

Grassley was an Iowa state legislator from 1958 to 1974. He then served three terms in the U.S. before being elected to the Senate. Conlin suggests Grassley has been in public office long enough. “It’s up to us, each and every one of you…and it’s up to me to pursuade our fellow Iowans that three decades in the United States Senate is long enough,” Conlin said before stepping closer to the microphone. “We think Senator Grassley deserves a rest.”

Conlin’s only other run at public office came in 1982 when she ran for governor against Terry Branstad and lost.

Competitor Bob Krause called Conlin to congratulate her on last night’s win. “I will be supporting her,” Krause said during an interview with Radio Iowa.  “And we will all work together to pull the plug on Charles Grassley in November of 2010.”

Krause, a veteran, said he’s proud to have made ending the war in Afghanistan and renegotiating U.S. trade deals “defining issues” in the campaign. “A lot of people were talking about both of those after I raised them early and consistently,” Krause said.

Fiegen, the other candidate in the race, was at his law office last night, wading through legal work that has piled up over the past year as he campaigned throughout the state. “I knew it was uphill as I got in,” Fiegen said of his campaign. “I just wanted to speak up for people that don’t have any voice.”