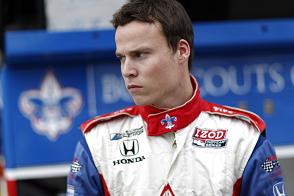 The #19 car in Sunday’s Iowa Corn Indy 250 at the Iowa Speedway in Newton is emblazoned with the logo of the Boy Scouts of America, which is celebrating its 100th anniversary this year. For the car’s driver, the Scouts are much more than a main sponsor. Alex Lloyd credits the Boy Scouting program with helping him to grow up.

The 25-year-old Lloyd grew up in Manchester, England, and has been living in Indianapolis, Indiana, the past four years. He was involved in Boy Scouts in England and learned a host of important lessons through the program, from first aid and survival skills to citizenship and physical fitness.

Lloyd says, “At that age where you’re very impressionable and you’re looking for different things to lead you in a direction, being involved in Scouting certainly helps lead you in the right direction and keep you on the right path at a young age, put some good morals and good values into you and also to have fun, have a good active lifestyle, go out there, go camping.”

Lloyd was involved in Tiger Scouts and Cub Scouts for four years or so and he regrets missing out on the chance to advance farther in the program to become an Eagle Scout. He started racing karts at age nine and eventually chose to pursue that as his profession. 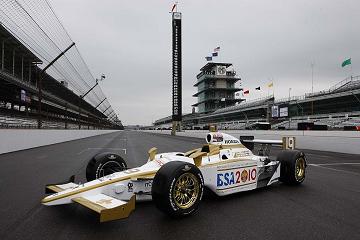 “Racing came about and other things came about that meant that I couldn’t go on in the Scouts as long as I’d wanted to and I’d planned when I joined,” Lloyd says, “but still, those years of being able to get all the lessons that you learn, and have fun with everybody and make a whole group of friends, was definitely very valuable to me.”

Lloyd placed fourth in this year’s Indy 500 and has raced at Newton once before. He’ll be appearing tomorrow, with the Boy Scouts of America Indy Car at Bass Pro Shops in Altoona to sign autographs. A Pinewood Derby racetrack will also be set up there so Scouts can race their own hand-crafted cars against the Indy car team and get a picture behind the wheel of Lloyd’s real race car.