Eleven bicyclists are recovering after peddling across the state of Iowa, nearly nonstop, in a 21 hour span. Dave Foster of Norwalk and Sean Arndt of West Des Moines hatched the idea several months ago, though Foster can’t remember exactly why. 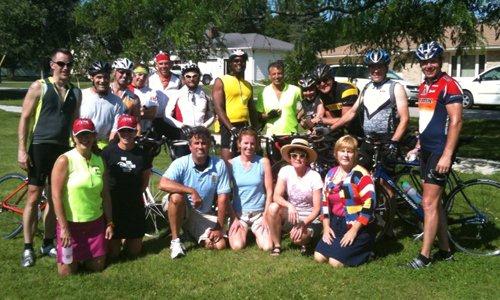 Arndt says the group was inspired by the documentary “Bicycle Dreams” about Bob Breedlove, a Des Moines physician who was killed during the Race Across America in 2005. The decision to ride across Iowa in 24 hours, which led to the team name “I-24,” was launched over a few beers at a Des Moines bar. Although the initial idea may have developed on somewhat of a whim, Foster says the team left no stone unturned when it came to planning the trip.

The support team included eight people and four vehicles. The “I-24” team left western Iowa, near Larchwood, at 4:30 Saturday morning and arrived in Harpers Ferry in eastern Iowa at 1:30 a.m. Sunday. The bicyclists stuck together the entire trip and stopped for 10 minute breaks every 38 miles. Arndt says the 304 mile trek was basically problem-free.

“The drivers on the Iowa roads were awesome to us,” Arndt said. “We had nothing but positive comments and everything worked out wonderfully.”

There was a 40-mile stretch where the cyclists barely saw a vehicle. Arndt says they traveled a county road between Osage and Decorah where they only encountered two or three cars. “It was pretty much like that road was made for us,” Arndt said.

The 11 bicyclists, 10 men and one woman, range between 26 and 62 years of age. Nine of the 11 are from Iowa. The other two live in Chicago and Denver. Arndt and Foster say they’d like to bike across Iowa in 24 hours again – but next time, they’ll map a different route and possibly invite more bicyclists.

Listen to the full Radio Iowa interview with Arndt and Foster by clicking on the following link:  pcbikers.