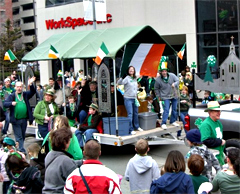 The coordinator of one of Iowa’s largest annual parades says they’ll discuss banning horses and other large animals after Sunday’s fatal accident at a parade in eastern Iowa. Ed Modglin, of the Friendly Sons of Saint Patrick, says the Des Moines Saint Pat’s Day Parade only featured one horse last year, so it’s not a tremendous concern.

“We don’t get a lot of people asking if they can put a horse in there but that’s something we’ll definitely have to consider for next year’s parade,” Modglin said. One person was killed and two-dozen were injured at the Fourth of July Parade in Bellevue after a pair of horses got loose and stampeded into the crowd.

Fifteen of the injured were children, close to the roadside to catch candy. Modglin says the annual Des Moines parade in March features well over 100 entries and often draws 15 to 20,000 spectators — and he shudders to think of a similar incident here.

“Accidents like that can happen,” Modglin says. “One of the floats could get out of hand and then you’re asking yourself, should we have floats? It’s not happening a lot. This was just an accident.” He says he’s not convinced horses should be excluded from parades as this incident may have been very isolated.

“I didn’t do a whole lot of research to see if there was a lot of other instances like this happening, but it seems like it’s kind of a one-off deal,” Modglin says. “The horse just got skittish and took off.” He notes, the biggest animals in the St. Patrick’s Parade in Des Moines are usually dogs.