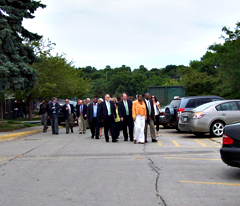 One of the state’s largest public housing project is undergoing a $31-million renovation. The 300 apartments in the Oakridge Neighborhood in Des Moines are home to about a thousand low-income adults and children.

Teree Caldwell Johnson, executive director of Oakridge Neighborhood Services, says the work kicked-off in December. “We have truly gone from what I think was an O.K. apartment to a ‘wow’ apartment,” Caldwell Johnson says. Some of the apartments are being reconfigured to accommodate larger families.

Bob Mahaffey, Mayor Pro Tem of Des Moines, says it’s the first major renovation of the apartments since they were built in 1968. “Here’s we are, 42 years (later). It comes a point in time, just like your own house, that you have to do some renovation,” Mahaffey says. “You have to update it.” The 31-million dollar project is financed, in part, with six-million dollars in federal economic stimulus money and more than 20-million dollars federal tax credits for low-income housing.

Iowa Finance Authority executive director Joe O’Hern helped fashion that package of tax credits for the low-income housing project. “This safe and decent housing means that young Iowans with their first job can get a solid foundation on their working lives; working families have a decent place to live,” O’Hern says. “…And children can do better in school because they have stable housing and they’re not moving all the time — moving in and out of different classrooms.”

Ron Sims, the deputy secretary of the U.S. Department of Housing and Urban Development toured the complex Thursday, chatting with a family living in a recently-renovated apartment. Sims praised the other programs run by Oakridge Neighborhood Services like preschool and after-school care as well as classes for residents getting a G-E-D or searching for a job.

“We can predict life outcomes by zip code; we can predict long-term earning of children by zip code; morbidity rates by zip code anywhere in the United States,” Sims said during a news conference. Helping Oakridge residents learn “how to live independently” is crucial, according to Sims, if that cycle of poverty is to be broken. Sims left an elected post in the Seattle area to join the Obama Administration. As King County chief executive, Sims managed the nation’s 13th largest county.