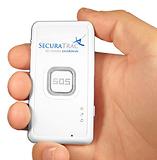 Parents will be able to use a new gadget at the Iowa State Fair next month that’s designed to help them keep closer tabs on their kids at the large, crowded venue. Chris Holbert is the inventor and CEO of what’s known as SecuraPAL — PAL for personal automated locator — and it’ll rent for just under ten bucks a day.

“It gets its location from the satellite systems and relays that location to parents or other caretakers, or in the case of the Iowa State Fair, to a group like SecuraTrac,” Holbert says. “If a child goes missing, we know exactly where they are and we can find them quickly.”

The small device can be placed in the child’s pocket, strapped onto an ankle or arm, or laced into a shoe. “There’s also a little panic or SOS button on the device that if the child is scared or lost, they can push,” Holbert says. “In about five to ten seconds, our network will be notified of their location and that they’re missing or they’re scared and we’ll go and find them quickly.”

If the parent becomes separated from the child or just wants to check on the kid’s location, he says it’s a fast, easy process using the parent’s existing cellular phone.

“If they have a web-based phone that can get to the Internet, then they can actually see on the screen a map of the fair and a little dot of where their child would be,” Holbert says. “Or, if they have text or email capability on their phone, they’ll get a read-out, an email or a text, that will say this is where your child is.”

The device can also be set so the parent is notified if the child enters or leaves certain areas, for example, if they leave the fairgrounds. The Iowa State Fair runs August 12-22. It will mark the first time the California-based SecuraTrac will be renting the devices at an event in Iowa.