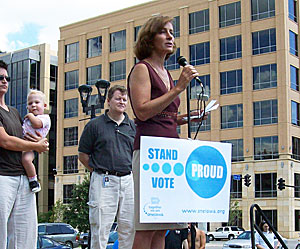 Two rallies were held in Des Moines this afternoon by the two sides in the debate over gay marriage.

Iowa First Lady Mari Culver, who said she was speaking for herself and not her husband, addressed a rally organized by “One Iowa” — the group which supports gay marriage.

“I’m a little bit nervous,” she began. “I’ve never spoken publicly on this issue, but I was asked, invited to attend and I readily agreed and wanted to share my thoughts with you,” she began.

Culver told the crowd of about 300 people she opposes a constitutional amendment which would ban gay marriage in Iowa. “Our state has a proud and a rich tradition of celebrating and promoting equality and civil rights for all of its citizens,” Culver said.

About an hour earlier, about 75 Iowans who favor a constitutional amendment banning gay marriage gathered on the statehouse grounds for a rally organized by the National Organization for Marriage. Danny Carroll of the Iowa Family Policy Center’s board of directors was invited to speak.

“This is not a contest where there are winners or losers.  Ladies and gentlemen, this is a test of your faith,” Carroll said.  “Will you be found faithful and accountable to the creator of this universe or not?  Let us be faithful. Let us be found steadfast in that faith.” 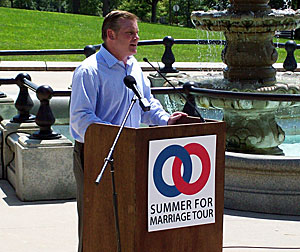 Brian Brown, president of the National Organization for Marriage, told reporters his group will run campaign ads in Iowa this fall, encouraging Iowans to vote for legislators who support the constitutional amendment banning gay marriage.

“I’m very confident. I think you’re going to see a major shift in the House of Representatives and you also are likely to see a shift in the senate, so we are going to be involved,” Brown said.  “And we’re encouraged and optimistic that you are going to see candidates elected who affirm the basic right of the citizens of Iowa to have a say on the future of marriage.”

This fall’s election was a key topic at the other rally, too. House Speaker Pat Murphy, a Democrat from Dubuque, was applauded for blocking a vote in the legislature that would set up a statewide vote on a constitutional amendment on marriage.

“If they’re able to get discrimination in the constitution, it will be a long, hard fight to get it out,” Murphy said, closing his speech with this: “Let’s fight for your rights.  Let’s fight for the rights of all of you…so that people will see that Iowa’s the one that has always guaranteed the rights of individuals in this state…Please do your part — on with equality!”

The National Organization for Marriage president led the crowd at the statehouse in a chant of “Let us vote!”

“Marriage is the union of a man and a woman.  This is not a novel idea,” Brown said. “In 31 of 31 states, every time the voters have had a chance to speak out and have their voice heard on this issue, they’ve voted to protect marriage as the union of one man and one woman. Do the people of Iowa deserve the same chance?”

According to Mari Culver, gay marriage may be a “defining issue” in the fall campaign. “Let’s get energized.  Let’s get organized,” Culver said.  “Let’s continue to have a progressive state where the equality and rights of all Iowans are honored.”

After the April, 2009 Iowa Supreme Court decision which paved the way for gay marriage in Iowa, Governor Chet Culver said he would “honor” the court’s decision.