You are here: Home / Military / Final send off held for Iowa Guard troops in Des Moines 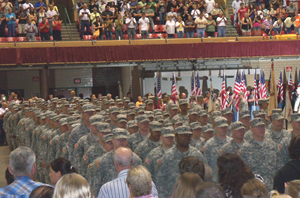 Soldiers line up for send off ceremony.

The Iowa National Guard held the last of over two-dozen send off ceremonies today in Des Moines for the Iowa soldiers who’ll deploy to Afghanistan in November.

Iowan Sydney Lett sang the song “Count the Stars” that she wrote in tribute as part of the send off at Veterans Auditorium for the 334th Brigade Support Team that will be part of the 2,800 Iowa soldiers and others from Nebraska that will head overseas.

The ceremony also included words from Governor Culver and members of Iowa’s Congressional delegation — with the loudest cheer coming after a remark from Congressman Leonard Boswell. Boswell said, “Bin Laden you better look out because the Iowa Guard is on the way.”

National Guard commander, General Tim Orr spoke directly to the soldiers. “I thank each and every one of you for your sacrifice, your service, and your dedication to our state, our nation and our children. Your commitment is phenomenal,” Orr said. Orr thanked Iowans for their support at all the send-off ceremonies.

“And I ask that you continue to support us through this next year the mission is just starting,” Orr said. Orr says Iowans can help by doing the little things, mowing the grass, shoveling someone’s walk, dropping off a home-cooked meal, “all those things truly make a difference.”

Staff Sergeant Dustin Gryp of Victor described his feelings after the ceremony. “Excited and ready to go,” Gryp said. He says the send off also made him feel proud. Gryp says the big turnout showed a lot of support and shows that everyone cares and that means a lot to the troops.

Gryp held his baby daughter as his two other young children looked on. He says they don’t fully understand that he’ll be gone for a year.

He says his son understands a little bit, his oldest daughter is not sure and the baby is too young to understand. Gryp says they may understand he’s leaving, but not the full scale of it.

The soldiers will first head to Mississippi and then California for final training before going to Afghanistan later this year.