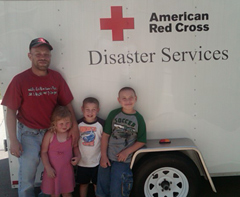 Robert Evans and his family.

Three families lost their homes and nearly all their possessions to flash flooding in Oskaloosa this morning.  But, none of the 10 individuals were injured and two pets were saved.

All three families escaped the flooding along Spring Creek on the east side of Oskaloosa. The area received more than four inches of rain in just a few hours.

Robert Evans woke at 3 a.m. by the feeling of water brushing on his leg. He quickly rounded up his three children – ages 4, 6 and 8 – and the family dog and called for help.

They waited on top of a minivan before being rescued by boat at 5:15 a.m. “The only thing that was crossing my mind was getting my kids out in time…hoping the water would let go for a little bit so we could get out of here,” Evans said.

Rescue workers navigated the boats through darkness and swift currents. “Once I saw the boat, my heart was just…relief,” Evans said.

By the time the boat arrived, Evans’ daughter had water up to her knees on top of the van.

Evans’ neighbors were also rescued by boat. Monroe Ernest Jr., his wife and his elderly mother-in-law were trapped in nearly six feet of flood water inside their trailer.

“My mother-in-law is bed ridden and she was floating on water in the bed. I had no way to get her out of the door because the current would just take us away,” Ernest said. “It was a bad situation.”

Breanna Hol, her husband Nick and their 11-month-old son also escaped unharmed. Breanna says the baby was crying and woke her up in the middle of the night. A short time later, she heard the sound of rushing water outside. Her husband opened the front door and flood waters poured inside.

“I went and got dressed and grabbed some clothes for my son and Nick. We were trying to get through the water in the house and it was shocking us as we went through,” Breanna said. “Nick got the four-runner started, I don’t know how, and he backed up to the road and carried our son out. I stepped out and the water was up to my hips. We got the dog and that was all we could get out.”

The Hol family was denied flood insurance because the area is not considered a flood plain.  “I honestly have no idea what we’re going to do,” Breanna said.

The Red Cross is assisting the three families.